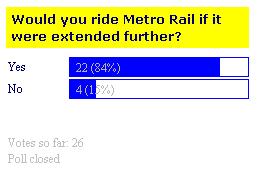 Looks like the sample we took – albeit a small one – would indicate that MetroRail should be extended. Personally, I’d like to see it from Medina to Orchard Park. With an offshoot that goes through North Tonawanda to Niagara Falls.

A new poll is at right. It’s not just a poll, but a call to arms. Will you be a soldier in the war against the birds? I’m not asking you to kill the birds yet … but it could come to that if they can’t be convinced to call off their terrorist attacks.