Observations from my bike ride

Mar 22, 2012 bike ride, Cold Springs Cemetery, Erie Canal, Excercise, flowers, Lockport, Map My Ride
It was far too nice to stay home and watch Scrubs all day (although I did some of that this morning), so I dusted off my bike and took it out for a spin. First time this year, so I had to do a little maintenance and put some air in the tires. Chain could still use some oil, but other than that, it’s in decent shape. Well … I need a new water bottle, lock and air pump. But other than THAT …
Nothing like a ride to clear your head and get your blood pumping. And it’s funny the things you notice at 10 miles per hour that aren’t quite so clear at 30 MPH.
I used a program on my phone called “Map My Ride.” There’s several different programs by the same company: Map My Run. Map My Walk. Map My Fitness. Map My Hamster … okay, I may have made that last one up. Anyway, I accidentally stopped it in the middle of my ride, so I have two maps (below) instead of just one. BUT if you combine them, I went 9.46 miles in just under 66 minutes. Not too shabby. 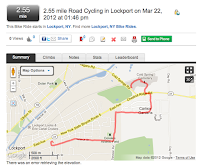 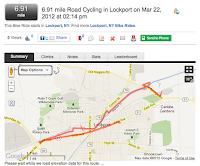 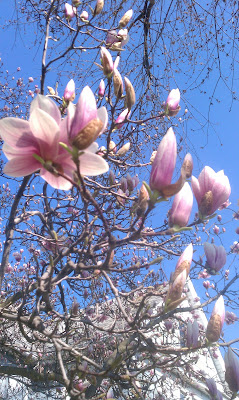