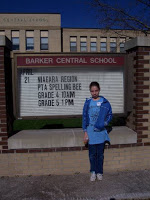 This is the word my daughter missed at the regional spelling bee today in Barker. She did very well, getting through the first two rounds of the bee with “blizzard” and “noisy.” Some of the kids had horrific words that fourth graders shouldn’t have to spell. I can’t think of any off the top of my head, but some words made me scratch it …

One of the students was eliminated in the first round with the word “aren’t.” He spelled it right but didn’t note the apostrophe in it. I felt bad for him. It was the only contraction through the first three rounds.

Another student was given a second chance that I didn’t think was fair. His word was glisten. But he spelled glistened. He was retold his sentence (each child gets the word in a sentence for context) and then spelled it right. I’m glad he moved on, cause he obviously just misheard/misunderstood … but I wish they had given “aren’t” some sort second chance.

Some of the kids took it tough. Some cried. It’s kind of high pressure. There were 64 fourth graders in all … and the audience was packed with friends, parents and other relatives.

Emily’s grandma (my mother) came out, as did her uncle (my wife’s brother) and his friend. I was glad to see people support their loved ones.

I was a proud dad today. Who the hell ever says “dermis” anyway?